Making a tabletop game with a group was a hard but rewarding experience to go through with. Coming up with the basic ideas for a table-top board game and dealing with game mechanics, the three act structure amongst a group of people was a challenge that was tough and equally interesting. The game we came up with is ‘Androids vs Mutants‘, a table-top RTS game pitting Androids and Mutants battling on a post apocalyptic Earth where humanity has been wiped from the planet. An infection had spread throughout the human population, causing massive death and a select few to gain mutations. Fearing world-wide devastation and loss of life, humanity had developed androids to help combat and kill every infected individual. Instead, they turned on the humans and, combining with the infected, destroyed all human life on the earth. And now, the androids and mutants must fight it out to determine who will rule the earth.

This game did not start out as this idea though, instead, it started out as we drew inspiration from the film ‘The Last Samurai‘, video game series ‘Total War‘ and came up with an idea for a game. Using the setting from ‘The Last Samurai’ and the RTS gameplay from the ‘Total War’ games, along with the grid-style of a map and the use of main units. The game was soon in its first incarnation, a battle between America and Japan where a militarised America took on a feudal Japan. Three main units would traverse the map and aim to ultimately kill the other side. Two players were a minimum, with the maximum number six. The map was split into four areas, a village, a river, a forest, and a town. Characters could also pick up an item card that could provide additional attack or movement.

The division with our group wasn’t that defined. Ideas were bounced around about the game between all members of the game. Considering how poor I am with drawing, I didn’t draw the map and the character cards because my writing is ineligible. The item cards were designed equally between me, Leo, and Sean as Racheal, unfortunately, could not make it for the lesson when we designed them.

The background research that I did was focused on the character units. When it came to designing the mutant characters, I took inspiration from the Left 4 Dead franchise and the infected characters in that game. Focussing on the main attributes in our game of movement, strength and defence, the units of ‘The Hunter’ and ‘The Tank’ immediately came to mind as potential bases for the character.

The commodious character and the breakneck character from the mutants side were created with some fine tuning and agreement between the group as to what the characters were called.

Other inspirations include creating an android unit called the Exterminator, obviously inspired by the title character from the film ‘The Terminator‘.

Another character that was conceived for the mutant side was called Goop, based on the character Bob from the film ‘Monsters vs Aliens.

The process we made as the group was about including and adding game elements and mechanics to the game to add layers to it. Creating the character cards and how the main attributes worked, how units moved around the board. The main movement of the characters was agreed by the group 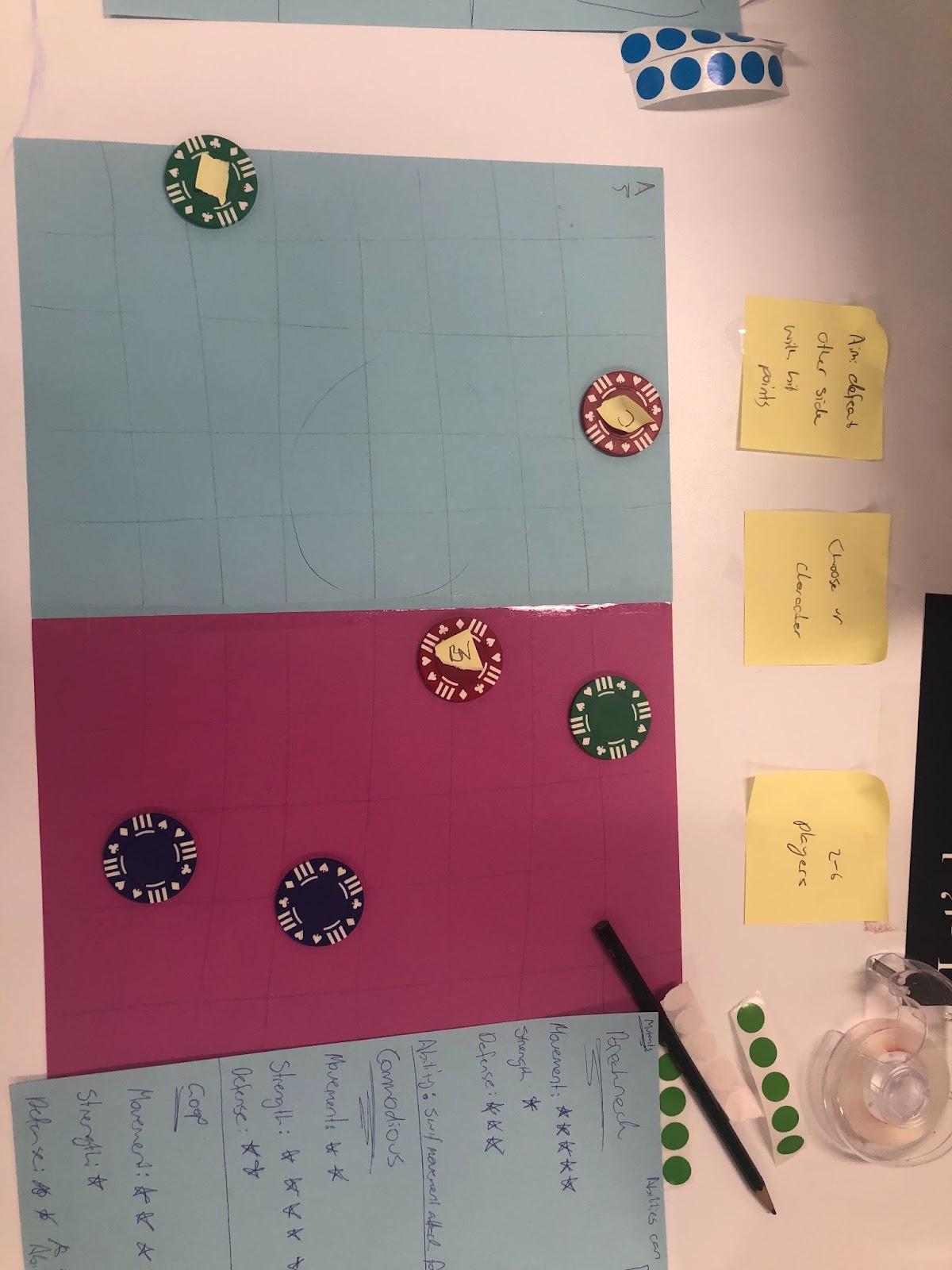 An image of the game board for Androids vs Mutants.

The main attributes were movement, strength, and defense. Figuring out how movement worked in this game took time and many changes. Eventually, we came to an agreement where the lower-ranked movement units could only move directly forward and to the side, whereas the highest-ranked movements could move in any direction. However, units could only move one block per turn. This decision was designed based on chess, where several pieces have unique movements but also allow for strategy and players to think before they make any movements. We also decided that with each turn, you could only move one of your units. This decision was made to add another level of strategy, as each main unit has different strengths and weaknesses, with players able to choose to adopt a more aggressive approach to the game, using units that deal lots of damage to attack the opposition and try to win the game or allow for a more defensive mindset, where players could focus on being more conservative and playing a more defensive mindset. 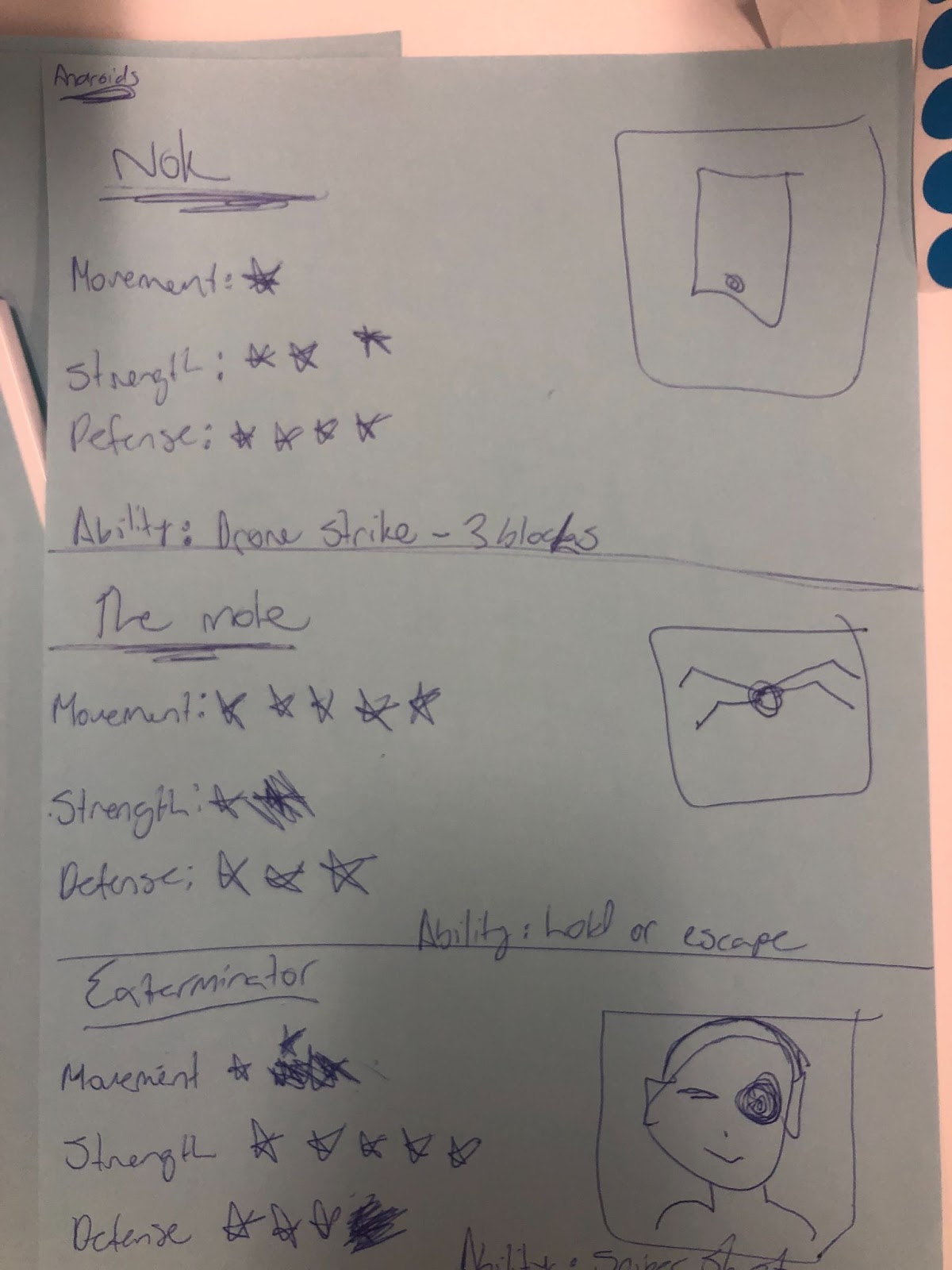 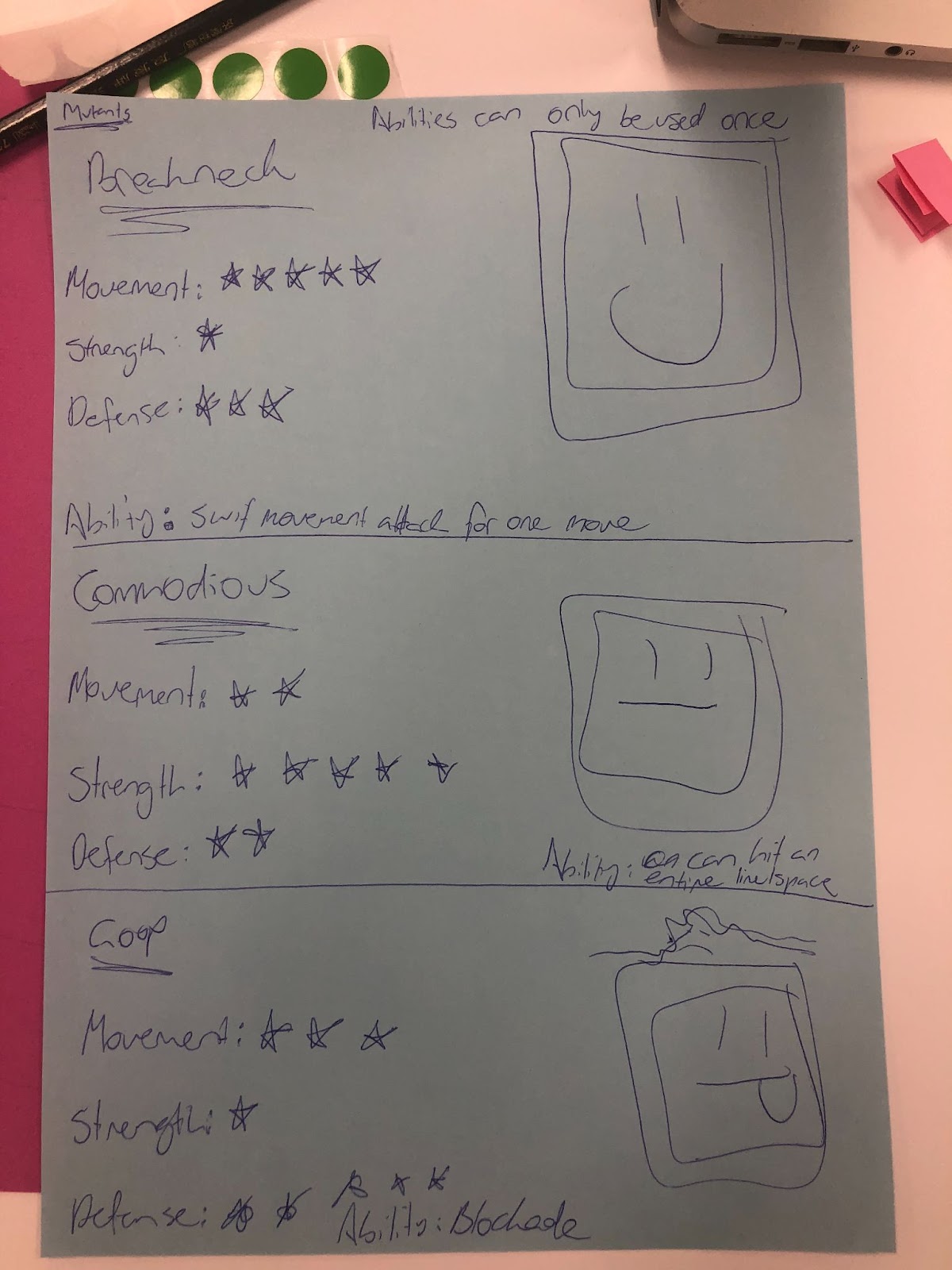 When it came to play-testing the game, it was me and Sean who play-tested the game for the very first time. Playing the game for the first time, we realised quickly that the main attribute of defence and strength had been broken and needed to be changed. We realised that some of the characters were made pointless in attack as their strength wasn’t enough to do any damage to the opponents. We quickly changed the attributes to fix the problem. We found the movement around the board to work, while the item cards also needed to be changed in regards to the ones that inflicted damage, as they too also had little impact on the health of the units. Also, randomly placing items around the board for the units to pick up was a good inclusion.

Making a board game had been a tough but also very enlightening experience as a group.

One thought on “Androids vs Mutants: Making a game experience”